Electrical Neopulser
The Electrical Neopulser is revolutionary device which uses a modified pulse to painlessly inactivate venom from bites and stings. Morevoer, it is specifically programmed to help the body deal with multiple staph and viral frequencies.

What do we mean by "neo"? Well, this is a new kind of energy that combines traditional electrical pulses from a 9V battery filtered through a built-in orgone generator, a powerful rare earth magnet, and special healing crystals (amethyst, among others), all embedded in the device. The result is a small pulse you can barely feel, and may even enjoy! Our customers say that it gives them energy throughout the day.
STRATEGIC DESIGN
Electrical pulses shown to painlessly inactivate venom and viruses

Using High Energy Electrical Pulses (HEEPs) to treat venom toxins has been documented as a proven technology. Today, many available instruments offered today involve high voltage and moderate amperage. These devices, called "stun devices", are very very painful. Ours is not. The new technology incorporated in the Neopulser is relatively painless (although after a few hours, most people feel a little tingle) and includes a proprietary frequency-based delivery protocol to assure consistent results.

Based on feedback, our customers use it for helping the body inactivate the following: - venomous bites from spiders, insects, scorpions, and snakes - viral attacks such as herpes, flu, and colds - bacterial infections such as MRSA and other Staph infections

This device seems to work best when:

1. the bite is fresh and/or the viral infection is at the beginning stages and

For Herpes, Flu, and Cold: Several customers have written back that, at the very onset of a flu illness (when one feels lethargic, feverish, etc.), activating the Electrical Neopulser and placing it on the skin for a few hours will help alleviate that particular flu episode. However, if one waits for a day or two when the full flu-like symptoms appear, it is not so effective at eradicating the attack, but rather it seems to lessen the duration and severity.

For the Brown Recluse Spider bite: this device (again based on our customer opinions and experiences) seems to work well even when applied 1 year after the onset of the bite symptoms. Many customers have replied back with testimonials that the recurring necrotic wounds received from the brown recluse spider bite had stopped. Most, however, have used the Neopulser in combination with our Antivenom Balm and Triple Skin Oil.

Theoretical basis of how it works

This device creates a pulsed electrical signal through the skin of the body. Because of the way it is designed, the pulses are being transmitted at a particular frequency of around 18 Hz. From this frequency chip, the direct electrical signal is then sent to several proprietary gemstones that have been found to elicit special vibrational frequencies to the body when electrical current is passed through them. In addition, the wire of the Neopulser is wrapped in a special way - using an ancient Egyptian toroidal coil configuration and sent through a rare earth neodymium magnet. This is similar to a vortex coil configuration that has been shown to pull in free energy from the environment. Finally, the wire goes through an orgone field generator, also thought to pull in unmeasurable energy frequencies from the universal aether. Furthermore, this unit has been updated by us from the original manufacturer to harness a proprietary frequency generation technology specific for helping the body manage spider bites, venom and specific viruses.

The end result is a new ("neo") type of pulsed electrical energy that is transmitted to the body. This energy, in our opinion, is helpful to the body in terms of increasing the immunity and inactivating venom and viruses. Here is an inside look of the Electrical Neopulser:

Disruption on the molecular level: The most common explanation for the mechanism of action is that venom and viral coat proteins are more sensitive to electrical current than normal mammalian cells. Venom typically consists of long-chain organic proteins but they are unusual in that, besides carbon/ hydrogen/ oxygen atoms, it also contains metallic atoms such as copper. It is this metallic atom content which evidently makes this long chain molecule susceptible to electrical disruption. Once the molecule is broken in one or more places by a high parallel current, its ability to harm its cellular neighbors is lost and normal white blood cell repair and other immune responses can then begin to take place.

Similarly, electricity has been shown to destroy viruses.In a remarkable discovery at Albert Einstein College of Medicine, N.Y.C. in 1990, it was shown that a minute current (50 to 100 MICRO amperes) can alter outer protein layers of HIV virus in a petri dish so as to prevent its subsequent attachment to receptor sites. (SCIENCE NEWS, March 30, 1991 page 207.) It may also reverse Epstein Barr (chronic fatigue syndrome), hepatitis, and herpes B. HIV positive users of this enclosed information may expect a NEGATIVE p24 surface antigen or PCR test (no more HIV detectable in blood) after 30 days. This is reminiscent of a well-proven cure for snakebite by application of electric current that instantly neutralizes the venom's toxicity. (LANCET, July 26, 1986, page 229.) And there may be several other as yet undiscovered or untested viruses neutralizable with this discovery. 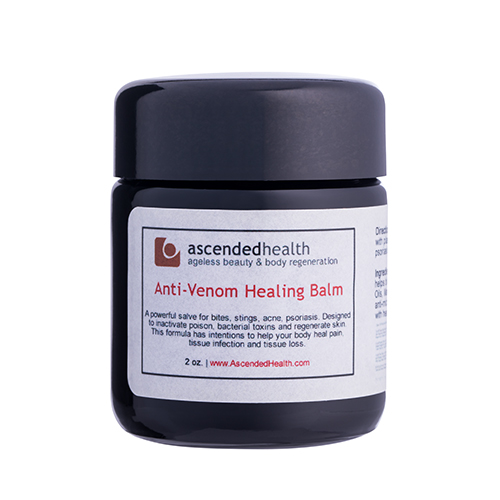 Size:
2 oz
Price $:
55.00
Anti-Venom Balm
The Anti-Venom balm is an all natural poultice to help the body with spider bites, bee stings, and skin toxins. It is full of toxin-absorbing ingredients such as bentonite clay and activated charcoal, as well as oils and herbs that help stimulate skin blood flow and help the body inactivate pathogenic microbes. This remedy is packed with herbal extracts that help the body stimulate skin rejuvenation and regeneration.

Anti-Venom Balm can be used as a facial mask. We believe it is one of the best facial masks available on the market today.
GO TO PRODUCT PAGE >
Complementary with >> DermAlive Topical Probiotic and I am Beautiful Skin Regeneration Oil. 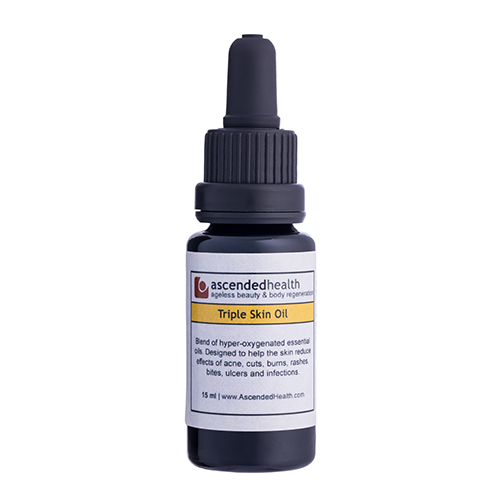 Size:
15 ml
Price $:
50.00
Triple Skin Oil
This oil is super concentrated with dissolved oxygen, essential oils known to be natural antibiotics, and tissue regeneration factors. Based on many testimonials, this oil is very effective for treating venomous spider bites as well as treating skin burns, cuts, rashes, and can even prevent scarring!

Triple Action: Designed to alleviate pain, stop infection and start skin regeneration, this is our most powerful oil for severe skin abrasions, such as cuts, burns, acne, and plastic surgery.
GO TO PRODUCT PAGE >
Complementary with >> DermAlive Topical Probiotic and Anti-Venom Balm. 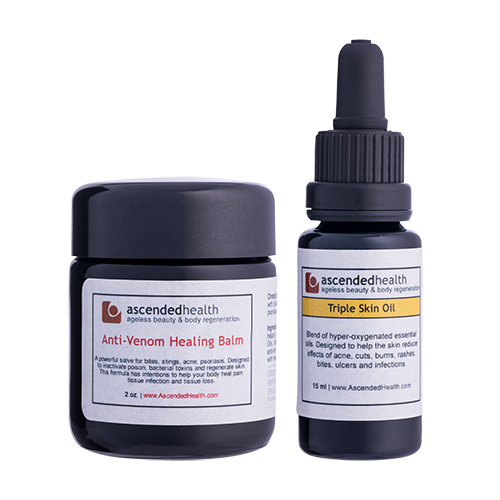 Anti-Veonm Balm and Triple Skin Oil are very complementary to each other. The Anti-Venom Balm has the ability to draw out impurities from the skin and the Triple Skin oil calms the irritated skin and assists with regeneration of the skin. We highly recommend this combination when dealing with a severe spider bite, bee sting, snake bite or other irritated skin conditions. The Triple Skin Oil is applied on the affected area at first. When that is absorbed, then the Anti-Venom Balm is applied on top of the oil.

The Electrical Neopulser is revolutionary device which uses a modified pulse to painlessly inactivate venom from bites and stings. Morevoer, it is specifically programmed to help the body manage bacterial and viral infections.

What do we mean by "neo"? This is a new kind of energy that combines traditional electrical pulses from a 9V battery filtered through a built-in orgone generator, a powerful rare earth magnet, and special healing crystals such as amethyst, all embedded in the device. The result is a small pulse you can barely feel, and may even enjoy! Our customers say that it gives them energy throughout the day.

We purchase the basic unit from a manufacturer and modify it with a sophisticated technology that pulses out proprietary harmonic healing frequencies.

This combo set includes a 2 oz. jar of Anti-Venom Balm and a 15 ml bottle of Triple Skin Oil. In our opinion, the Electrical Neopulser is great by itself, but when used simultaneously with our skin regeneration products, works wonders.
GO TO PRODUCT PAGE >
Price $:
355.00
Combo Set : Neopulser with 30ml ProAlive and Active Detox Probiotics
Designed to assist with: Herpes, Flu, Cold & other systemic viral conditions

This combo set includes one 30ml of ProAlive and one Active Detox Liquid Probiotic. In our opinion, the Electrical Neopulser is great by itself, and it is even more effective when used simultaneously with Ascended Health Probiotics. We recommend the combo pack for first time Neopulser users.
GO TO PRODUCT PAGE >
Why are there changes and variation of flavor, texture and taste of our products from time to time?
The answer is that we purposely create each batch different from the previous batch to keep the pathogenic microbes guessing. This is how nature works and we closely follow nature's law. In the wild, you do not see consistency, you see variation.

Even though we use the same recipe each time no batch is ever exactly the same - similar to wine making.

We believe that harmful microbes will have a harder time adapting to a given product (and becoming resistant to it down the road) if they are given a different concentration of oils an herbs from one batch to another.

Don't be surprised to have an inconsistent tasting product from Ascended Health from time to time. It is the long-term results that we are after. On the contrary, please welcome it - because we feel that pathogenic harmful microbes can not mutate fast enough to counteract it.

Variation is only possible because we HAND PRODUCE all our products. We do not believe in automation - human hands touch each batch.

Also, the friendly microbes play a big role in our products. The way the microbes bio-activate the products can change consistency, texture and flavor. Depending on where our minerals get sourced (we also feel the need to shift the trace mineral content from time to time), the color may be different each time.

Our Earth is in continuous change and we use only products from the earth - no synthetics. We honor Mother Earth and our products reflect our intention. This is the basis of Ascended Health products. We work in accordance to Nature's laws. We understand that this may not be for everyone.
MORE LESS

SHIPPING NOTICE
Our products are hand made in small batches. Due to high demand, delays of 2-3 days may be experienced in shipping. Most packages are shipped within 2 business days of an order. We do our best to accommodate all orders as quickly as possible.

If you choose EXPRESS SHIPPING, this is the method and speed of shipment after our shipping department receives your order. There is an automatic 24-hour delay due to order processing, and there may be an additional delay due to lack of inventory.
Disclaimer
Ascended Health staff members are not medical professionals and do not distribute or infer medical advice and information. The FDA has not approved any of the statements or products made by Ascended Health. Ascended Health products and statements are not intended to diagnose, treat, cure and/or prevent disease.